On a recent visit to the new Home for Holocaust Survivors which the Christian Embassy is helping to establish in Haifa, an ICEJ AID team found workers busy putting in a new elevator and fitting rooms with a fire alarm system. Amid these important finishing touches, a handful of elderly survivors were starting to move their belongings into place, anxious to begin anew in this special assisted-living facility operated by the local Israeli charity Yad Ezer L'Haver ("Helping Hand to Friends").

The director of “Helping Hands”, Shimon Sabag, is arranging a gala dedication ceremony for mid-September which will be attended by Israeli President Shimon Peres, Prime Minister Benjamin Netanyahu, several cabinet ministers and two dozen Members of Knesset, plus the two Chief Rabbis of Israel and many other guests. The ICEJ will be honoured at this event as the primary funding source for the home, which is being hailed as a model for assisting the thousands of destitute, ailing and lonely Holocaust survivors in Israel today.

The Hebrew and foreign media have already given the project extensive coverage and more is expected as this unique and timely project comes to completion. 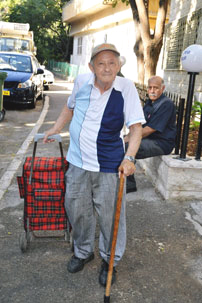 Beginning in late July, some 80 residents selected from a long waiting list to live in the home will be settled into their rooms. Most have only a few meager possessions for the movers to carry, but they will come with heavy memories of past sufferings along with present weights of loneliness and layers upon layers of serious health ailments.

Still, anticipation is growing among the aging survivors, and Sara Movshowitz stops by with a few bags several weeks early to declare, “I am ready!” A widow living alone in poorly-maintained subsidized housing, she owns little beyond her clothes and some personal effects. But her emotional ‘baggage’ from the Shoah is immense.

Born in 1927 in Romania, Sara was just a teenager when World War II broke out. “It was terrible,” she recalls of the German invasion. “They kicked us out like dogs and wouldn’t allow us to take anything. We heard through loudspeakers: ‘Get out of your homes!’”

The Nazi soldiers were evil, violent men who relished frightening Jews. “Whenever we saw them we would immediately freeze and keep silent because we were scared to death of them,” Sara said. “They often beat Jews for no reason and life in the ghetto became very difficult. We saw horrific things which I will never forget.”

Today, Sara stills carries a tattooed number on her arm and she is very ill. She has water in her lungs and recently suffered a stroke. But she insists “the home will be a light at the end of the tunnel for me after all I have gone through,” as all her medical needs will be cared for by volunteer doctors and nurses from two nearby hospitals.

Micah Merom is another early arrival. For years, he has moved from one homeless shelter to another. When he heard news of the Haifa home, concerned social workers put a lot of pressure on Helping Hands to take Micah. "We were the only ones who could give him a home", said Sabag.

Micah was born in Budapest in 1943, surviving unspeakable horrors as an infant before he could ever talk. His father was confined to a Nazi work camp, and his mother and family faced a daily struggle against starvation and disease. Micah’s early development was severely retarded, leaving deep inner scars and latent health problems.

Micah eventually moved to Israel, married, had three daughters, and became a successful businessman. But a traumatic divorce in 2003 cut off all connection with his family. He is not invited to family events, such as the bar mitzvah’s of his grandchildren. His efforts at reconciliation have been futile, and his large financial debts led to bankruptcy. Today, he still owes large sums of money and lives off a small government pension extended to qualified Holocaust survivors. He is plagued by depression, insomnia and suicidal thoughts, not to mention diabetes, high blood pressure, and heart disease.

“I feel shattered inside… Like an empty dish”, he says. “It is difficult for me to live out the day.”

But after his first night in the Haifa home, Micah was very happy to have his own room, daily meals and caring friends.

David Gitzberg, 86, is another soon arrival who suffered long from bitter cold and starvation in several ghettos and German concentration camps. “For three years I didn't know what food was. We hardly ate and I was skinny as a skeleton. I was very weak but managed to survive, the only one left in my family.”

David came to Israel in October 1990 and today he has a wife and two sons, who both live overseas. The couple are currently fed at the Yad Ezer lunchroom and are anxiously inquiring each day about when they can take up residence.

Meantime, Ephraim Teitelbaum, 84, spent his youth as a partisan in the forests of Poland. “By then I had neither home nor family as they were all killed”, he recalls. “I had to move from place to place and was constantly fighting for my life.” 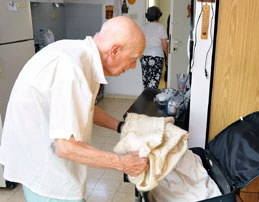 Today, he has grave heart problems and barely gets by on retirement payments. “Because I feel so alone and have undergone such difficulties in my life, I really hope I can live in the Home”, he said. “I’ll have a safe place where I can eat and sleep with contentment, something that I tried to find all my life.”

Shimon Sabag first founded a small shelter for 15 Holocaust survivors after being stunned to discover how many live in poverty. He had opened a soup kitchen in Haifa and immediately noticed how many people in line had tattooed numbers on their arms. "It gave me shivers. I always thought these people had been taken care of”, he said.

The International Christian Embassy Jerusalem partnered with Sabag in January to expand the home by purchasing and renovating a four-storey building next door. Funds are still needed to finish the project and pay some unexpected final costs. 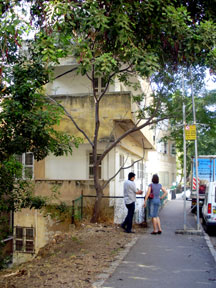 In addition, a building with three floors on the same street has now been offered to Yad Ezer for the very reasonable price of 250,000 Euros. It could house another 50 survivors from the current waiting list of over 1,800.

The ICEJ is asking all our friends and supporters worldwide to give generously to this worthy project so that we can commit to the new building by the time of the dedication ceremony in September. The need is extremely urgent and the whole nation of Israel, from the president and prime minister down, will be there to witness this incredible expression of Christian love.

And be sure to mark it for “HOME FOR HOLOCAUST SURVIVORS”.