עמותת יד עזר » ” THE HOLOCAUST AND HEROISM REMEMBRANCE DAY” was marked by an emotional and poignant ceremony held at the Yad Ezer L’Haver Association in Haifa, undeterred by the Corona Pandemic

” THE HOLOCAUST AND HEROISM REMEMBRANCE DAY” was marked by an emotional and poignant ceremony held at the Yad Ezer L’Haver Association in Haifa, undeterred by the Corona Pandemic 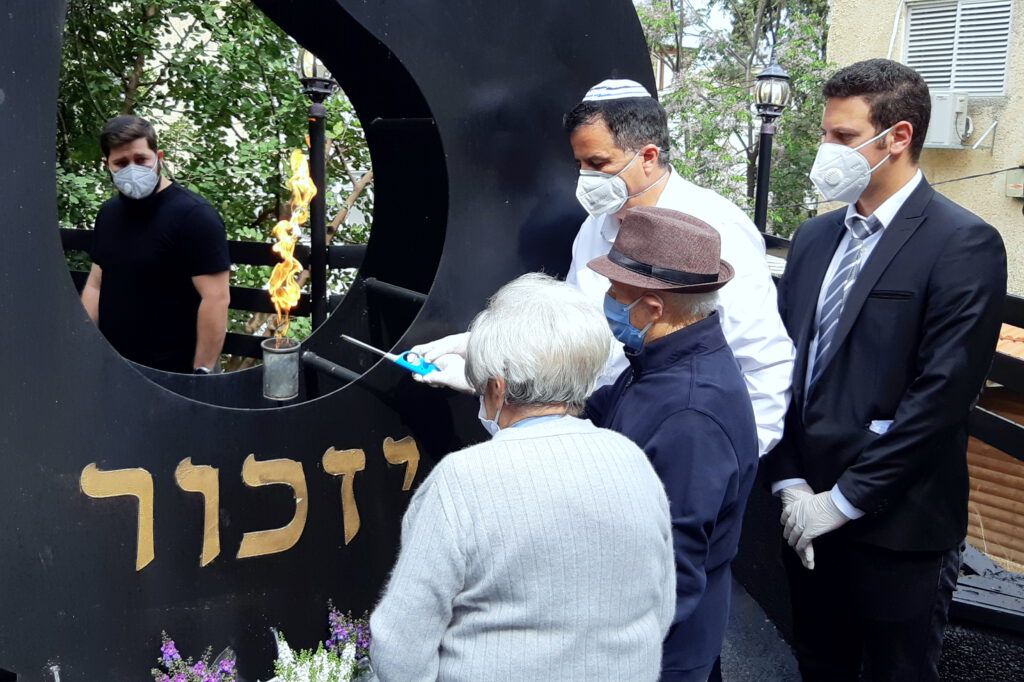 “We are standing here honoring the Holocaust Day ceremony in the shadow of the Corona crisis. We refuse to give up and have decided to hold the ceremony in accordance with the guidelines of the Ministry of Health and fully comply with all protective regulations required. This is to remind everyone that we do not forget or forgive,” said Yad Ezer CEO, Shimon Sabag, at the Yad La Nitzol Memorial Square for victims of the Holocaust at our Complex on Kassel 6 in the Hadar HaCarmel neighborhood of Haifa. 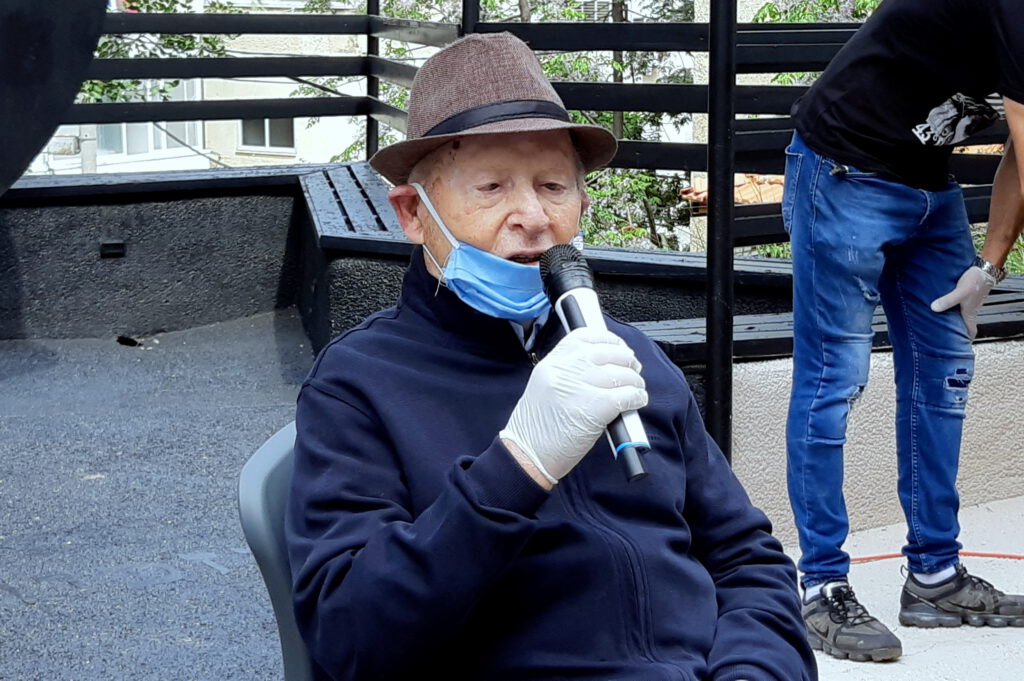 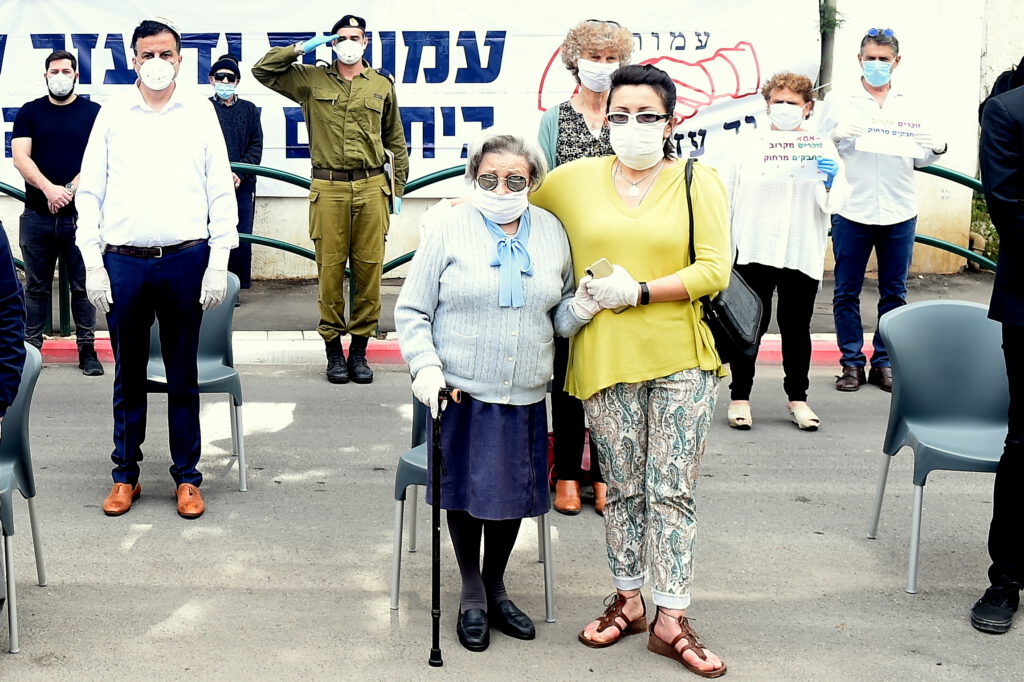 The”Kaddish” mourning prayer was said by Holocaust survivor Shlomo Scherzer, 93, from Yasi, in Romania, who is also a resident of the association’s warm home for Holocaust survivors for many years. Cantor Haim Greenstein performed the “God Full of Mercy” prayer. A chapter of The Psalms was read by Rabbi Yaakov Maman, the charity’s veteran rabbi. 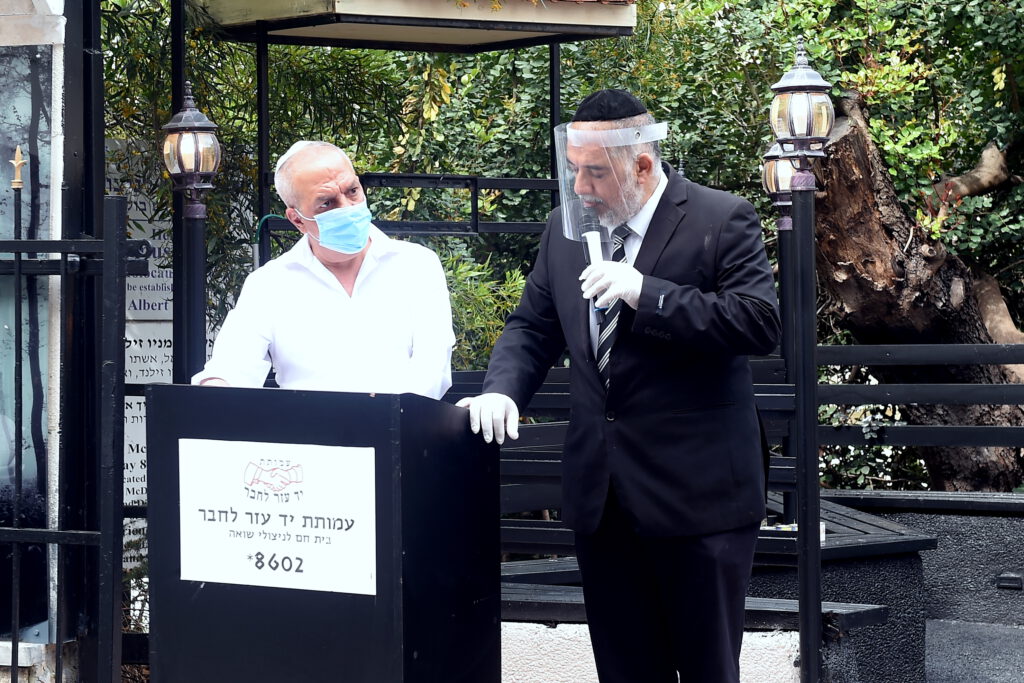 Israeli police saluted Holocaust survivors of the Yad Ezer L’Haver organization in Haifa this morning, our dear friend, Sergeant Haggai Panker, from the Lower Haifa District Police Department, said: “On behalf of the Israeli police: We thank you and appreciate your contribution to the people and the country. “ 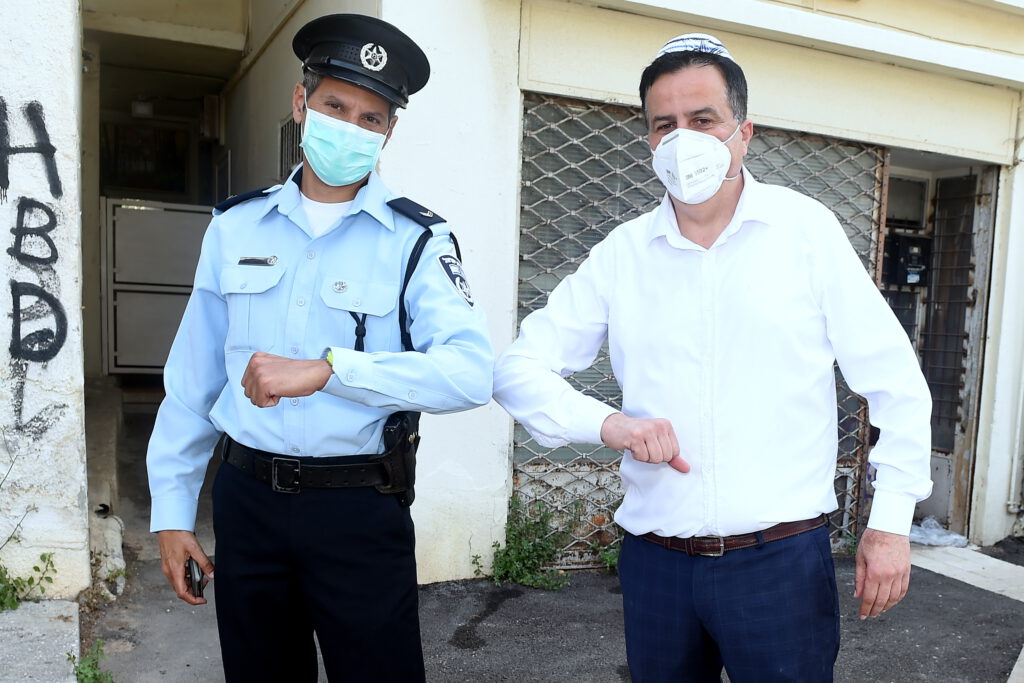 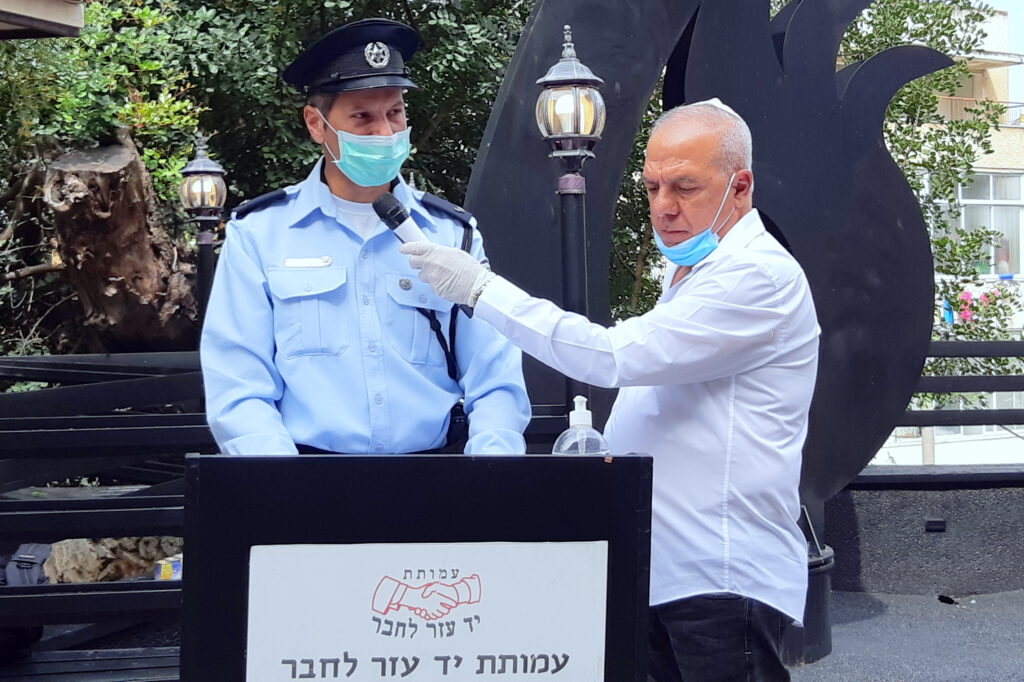 To watch the video of the Israeli Police, here !

Opening speeches were held by the founder and CEO of the Yad Ezer L’Haver, Mr. Shimon Sabag, and Ms Judith Setz, ICEJ Haifa Home Director and representative of the “International Christian Embassy in Jerusalem” who has been contributing and helping the association for many years.

Founder and CEO of Yad Ezer L’Haver, Mr. Shimon Sabag, opened the ceremony with an emotional speech: “Here we are 75 years after the Holocaust. The current situation today caused by the Corona virus in Israel will not prevent us from commemorating The Holocaust and Heroism Remembrance Day and the memory of the six million who perished in the Holocaust. 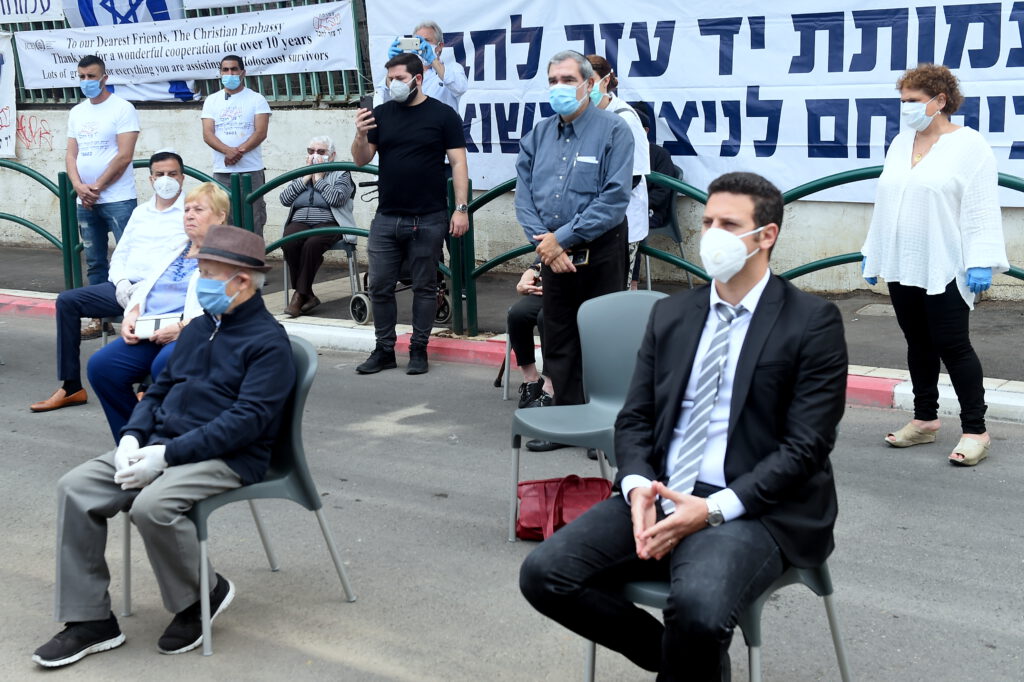 This is a memory we must keep alive in every situation! Today, the technological means allow us to remember together, tell the story of the Holocaust and bring the special Remembrance Day Ceremony into the homes of all Israeli citizens. 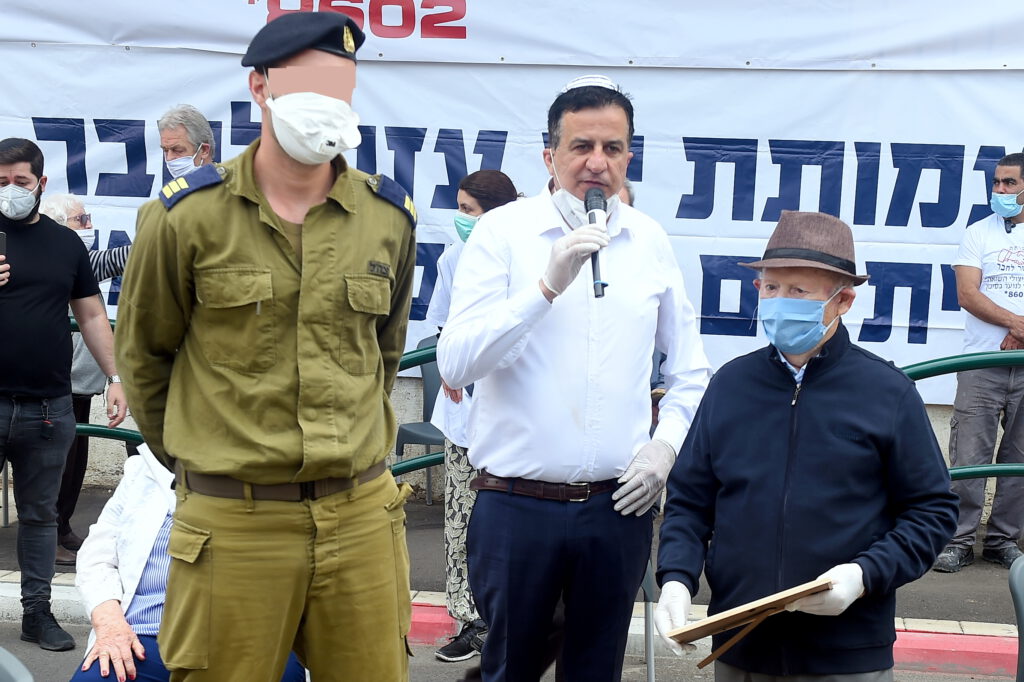 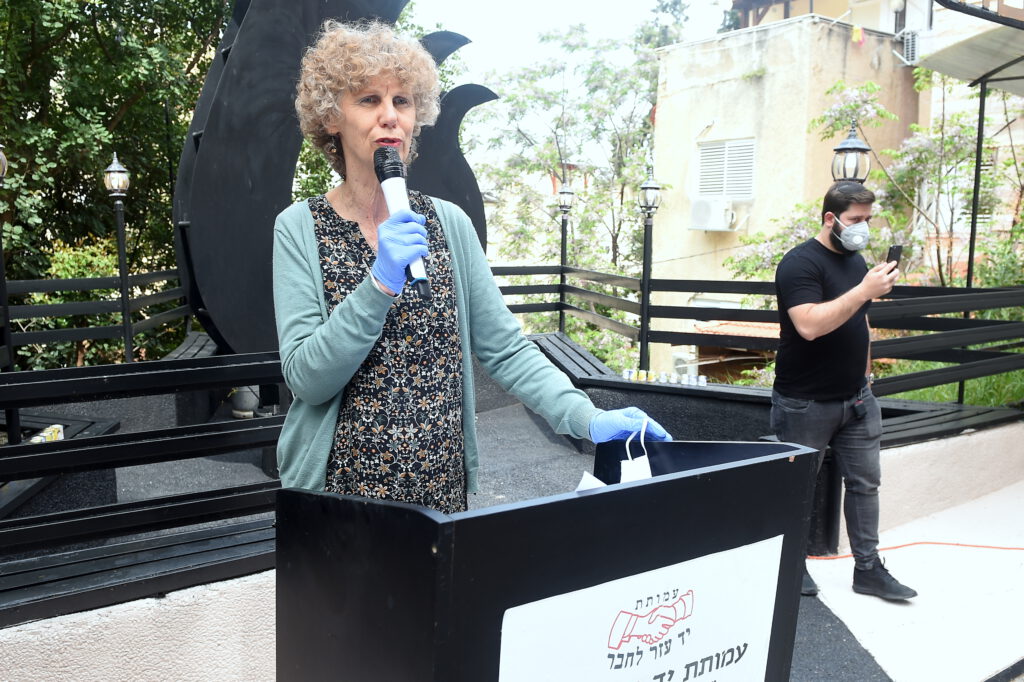 You Holocaust survivors, are the true heroes of us all and we must take responsibility and care for those who survived the Holocaust and participated in the establishment of the state. Unfortunately, due to the Corona pandemic, this year’s ceremony does not take place like every year in front of thousands of spectators, but nothing will prevent us from continuing this memory tradition of ours for eternity!

Ms. Yehudit Setz, Deputy Welfare Department and representative of the “International Christian Embassy in Jerusalem” who has been contributing and helping the organization for many years delivered a moving address to all Holocaust survivors. Haifa’s Deputy Mayor David Etzioni, moved by the special ceremony, said: “Every year I stand here elated and enchanted. Every year there is a crowd of thousands, this year here we are but a few although the memory is exactly the same memory, the pain is the same pain. I pay homage to the survivors and salute those who do not forget. Most important I salute and bow to people like Shimon Sabag, who are motivators and men of action and continuously care for the Holocaust survivors throughout the year. 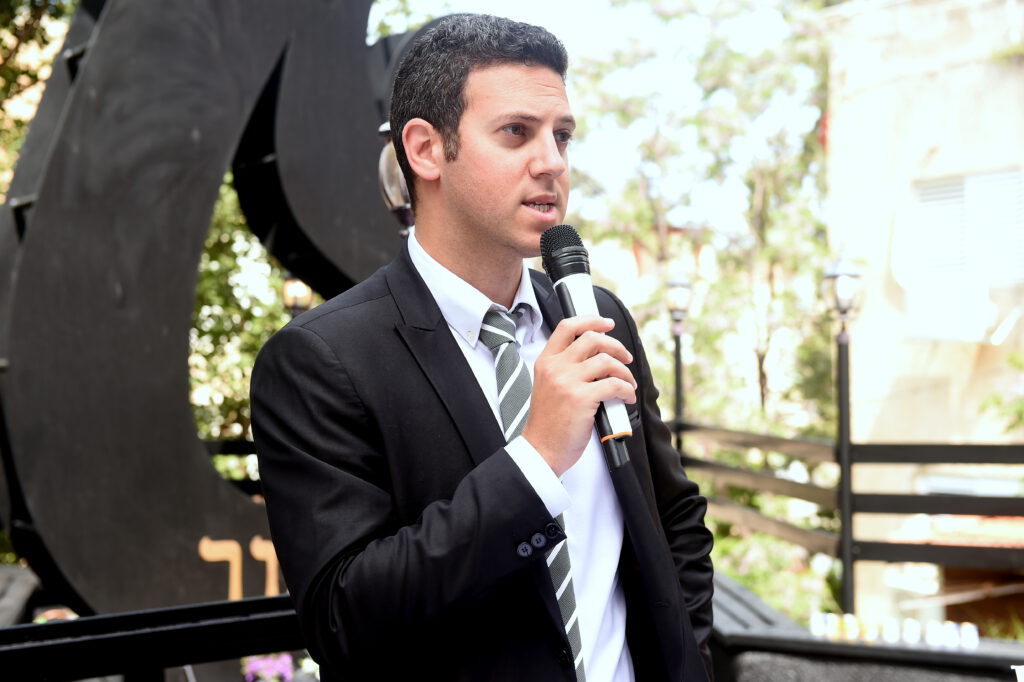 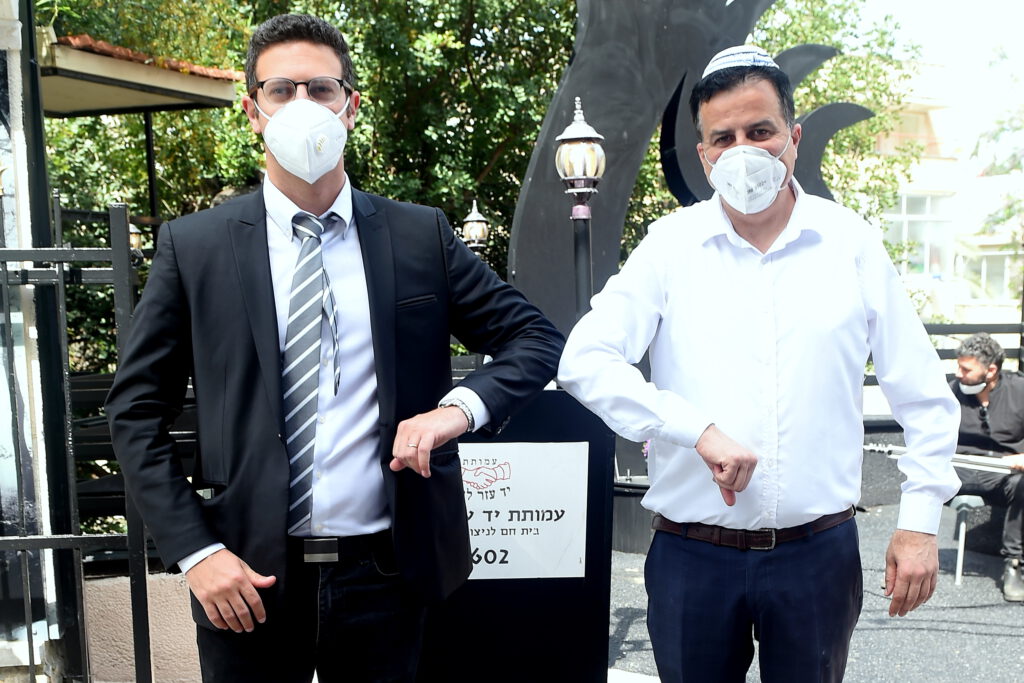 During this special ceremony, a video recording of a special support blessing to Holocaust survivors of the association specifically recorded for this ceremony by Israel’s Prime Minister Benjamin Netanyahu was broadcast. “The attacks on the Jews culminating in the Holocaust do not stop, Thank God we have the power, the will, the enthusiasm and the ability to protect you and protect our people and our country, so for me your Holocaust survival stories are not just a memory, but a commandment, no more, Never Again! We will always protect you and ourselves and I hope you also enjoy the fact that not only do we have a country but good people, people who love you, like this wonderful “Yad Ezer L’Haver” association and the work that you do Simon Sabag. I want you to know that in your survival story you, Holocaust survivors, embrace the whole story of the Jewish people’s rebirth! ”

To watch a video of Prime Minister Netanyahu’s blessing to the Holocaust survivors, here !

Mania Herman, 87, a Holocaust survivor from Romania, also held an emotional speech at the ceremony, “It is a great privilege for me to tell my personal family story here at the ceremony today. It is not easy for me to relive the horrors I went through, the death I saw before my eyes, but it is my duty to tell so that future generations also know what happened and how millions of Jews were tortured and murdered just because they are Jews. “

At the end of the poignant ceremony that took about an hour, Romanian Holocaust survivors Mania Herman and Shalom Shtamberg recounted their testimonies and the story of their heroism and survival during the Holocaust to many media outlets in Israel and the world. 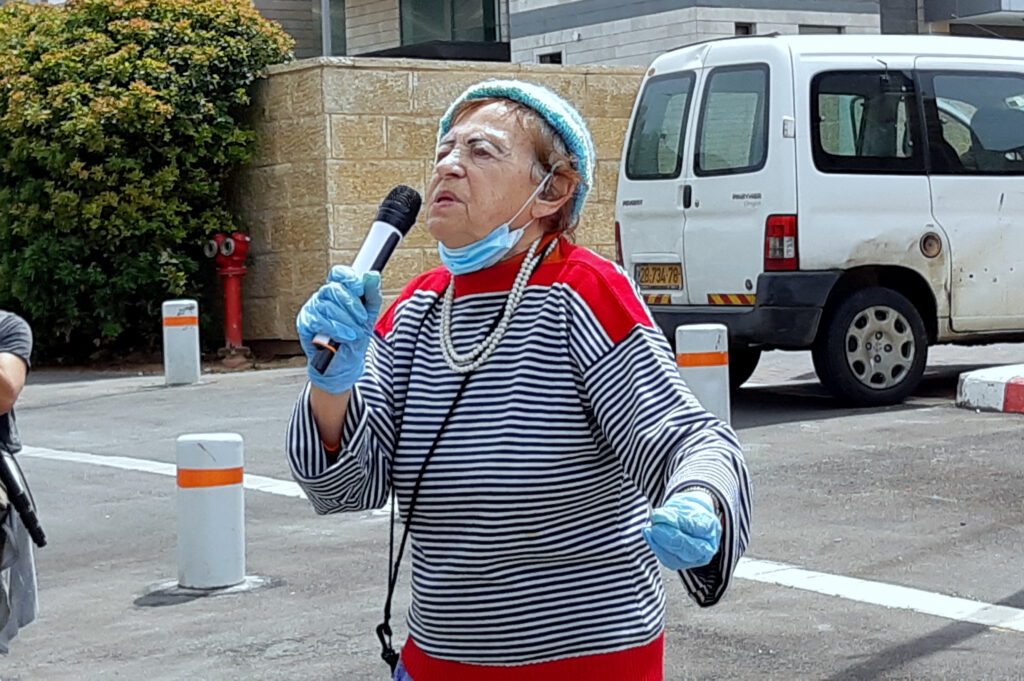 After the ceremony, Holocaust survivor Ms. Mania Herman travelled to several neighbourhoods throughout the city of Haifa and told her story about her life and survival with courageous heroism during the Holocaust, to the large crowd of families with children sitting and eagerly watching from the balconies. 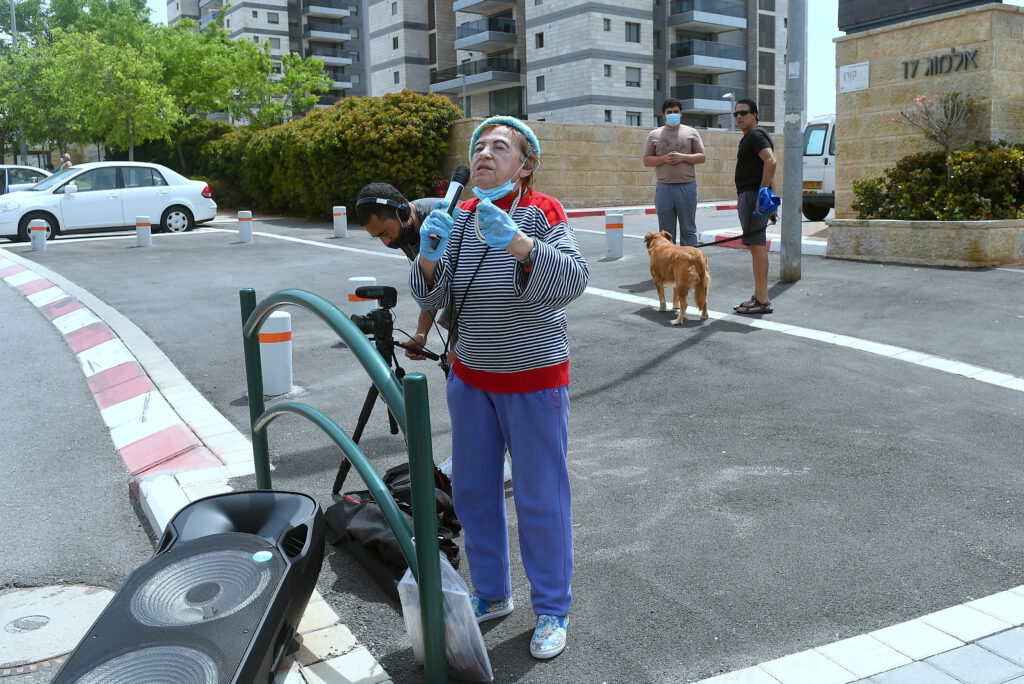 Watch a video taken of the testimony of Holocaust survivor Herman in front of the crowd of home balconies in the Neot Peres neighbourhood of Haifa, here !

The ceremony was broadcast direct and live on social networks and also transmitted through the ZOOM software directly to the homes of about 100 Holocaust survivors, residents of the Yad Ezer L’Haver in our compound. 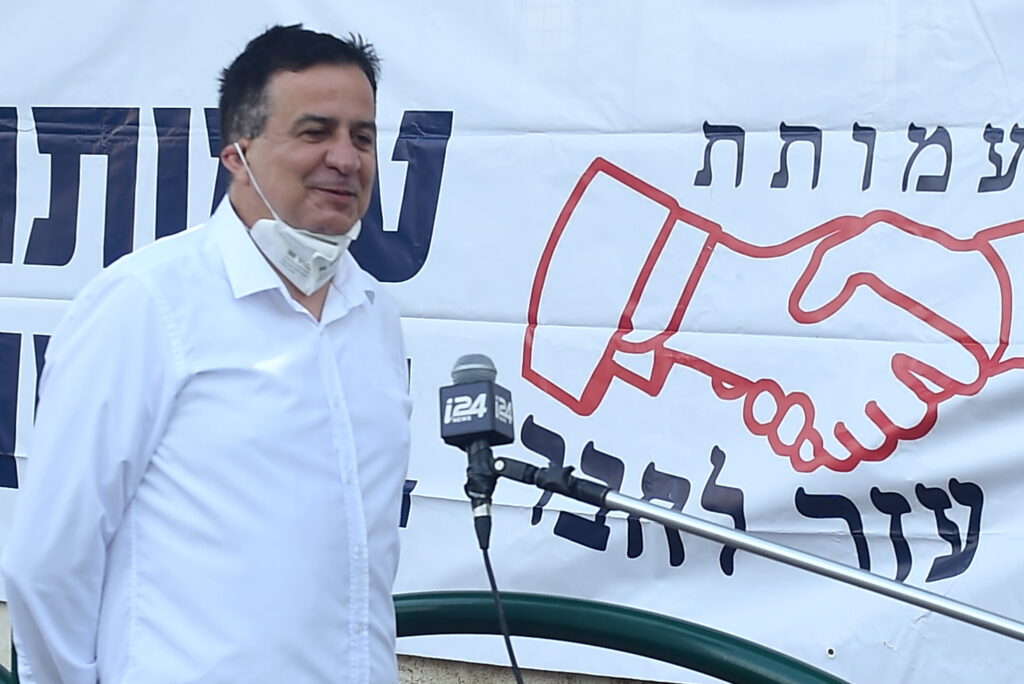 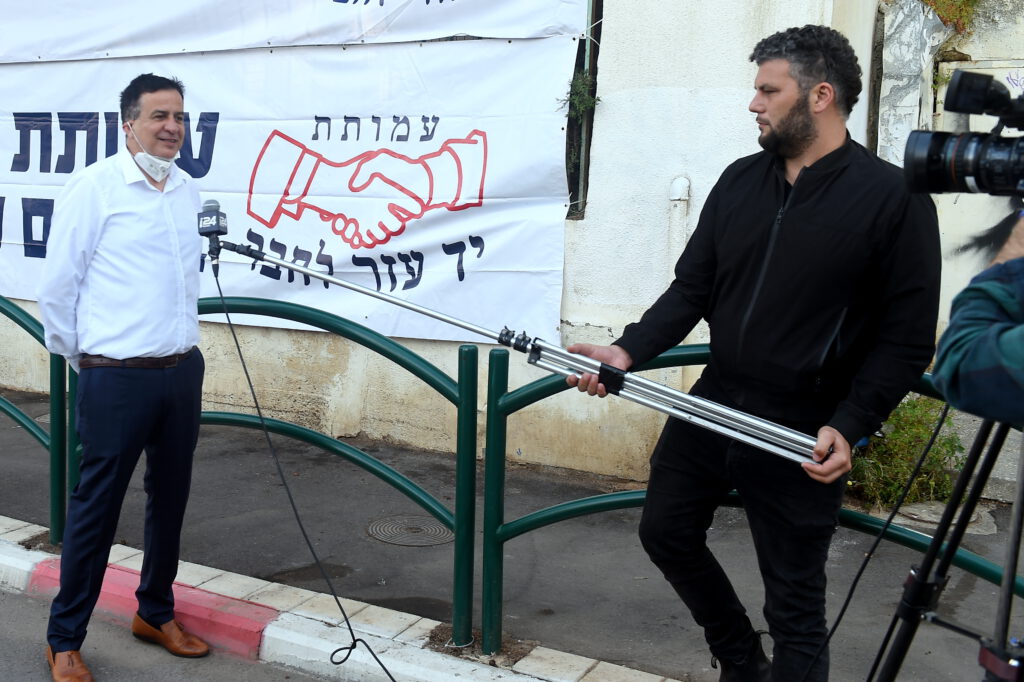