17 בJuly 2015
תחום: Events
תגיות: Bar Mitzvah,Jerusalem,Knesset
The foundation led by its founder and CEO Mr. Shimon Sabag, who first came up with the idea, worked tirelessly for several months, initiated and carried out this most unusual and exciting event for the Holocaust survivors living in the 'Residential Home for Holocaust Survivors', which is in the suburb of…in Kasel Street in Haifa.

Dozens of Holocaust survivors celebrated this week on Monday 13.7.2015 belated Bar and Bat Mitzvah celebrations at the Western Wall in Jerusalem in the presence of the Chief Rabbi of Israel, Rabbi David Lau, the Rabbi of the Western Wall, Rabbi Shmuel Rabinovitch, Knesset member Yair Lapid, along with other Knesset members and plenty of other guests. This colorful and unusual event was initiated and organized by the foundation 'Yad Ezer Lechaver' for the benefit of the survivors, who were denied such a celebration in their childhood because of the oppression of the Nazis at the time of the Holocaust.

The event began in the morning with an excursion that set out from the foundation's base in Kasel Street in Haifa. Among the Holocaust survivors 16 Bar Mitzvah 'boys' and 14 Bat Mitzvah 'girls', accompanied by dozens of other Holocaust survivors from the 'Warm Home for Holocaust Survivors' and from all over Israel who came especially for the event at the plaza of the Western Wall, the remnant of our temple. Already at the entrance to Jerusalem two cars from the Jerusalem police force were awaiting the arrival of the delegation of two full buses of those celebrating to lead them in ceremony to the site of the Kotel. 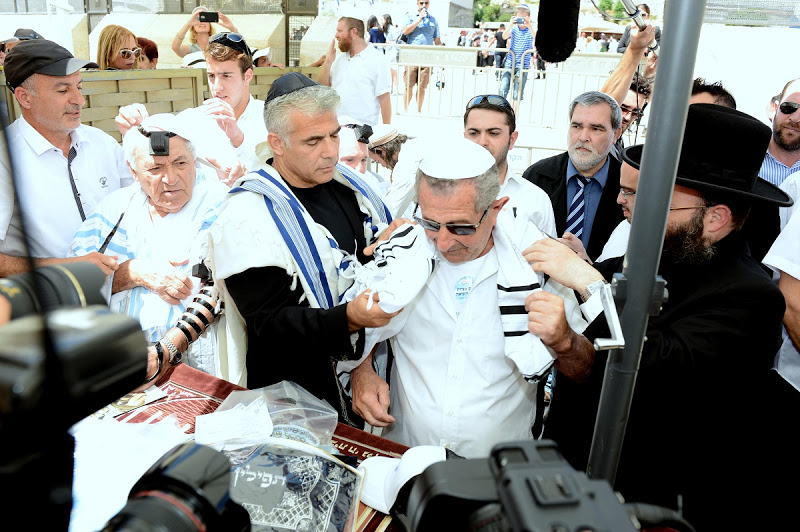